An analysis of the international carbon fiber industry

(1) the development of the international carbon fibre industry
The middle of the 20th century, developed countries invest a lot of manpower and material resources to study carbon fiber, carbon fiber composite material was originally because of its irreplaceable in the structure of lightweight material performance, first is favored in the military field of aeronautics and astronautics; Test technology in 1959, the Japanese Osaka industry into Mr. Zhao men's first invented the polyacrylonitrile (PAN) based carbon fiber, in 1964, the royal institute of aviation (RAE) watt and others through the production of high performance process of polyacrylonitrile (PAN) based carbon fibers, the fiber tension draft thermal stabilization process, in order to meet the transformation of the structure, make the polyacrylonitrile (PAN) based carbon fibers into the mainstream products, and open civil carbon fiber commercial application in the 1970 s; In the 1980s and 1990s, carbon fiber developed rapidly under the guidance of civil aviation. Entering the 21st century, carbon fiber production technology is mature, enlargement of the application of carbon fiber, carbon fiber market demand has increased dramatically, carbon fiber industry has become increasingly mature.
The international carbon fibre market is still dominated by Japanese and American companies, according to the market share of the global carbon fibre market. Japan is world's largest producer of carbon fiber, the carbon fiber technology mainly in the hands of the Japanese company, the production of carbon fiber is a world leader in both quality and quantity, Japan toray high-performance carbon fiber research and production in the world of "leader".
The data shows that Japanese companies account for 49% of global production in the fibre market. In the large tow carbon fiber market, Japanese companies have market share accounted for 52% of global production capacity, the market share of U.S. companies have accounted for 24% of global capacity, the japan-american total of the two countries has 76% of the world's large tow carbon fiber production capacity, is in obvious dominance. 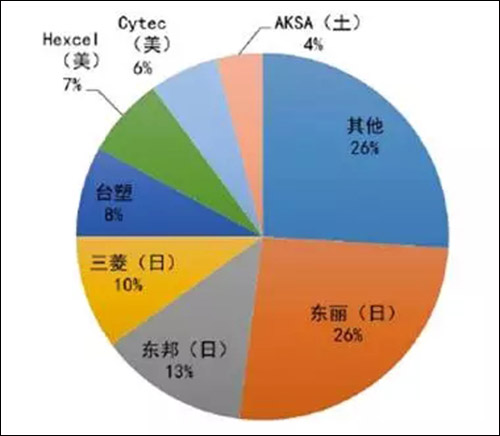 A map of the market share of fibre-fibre markets worldwide 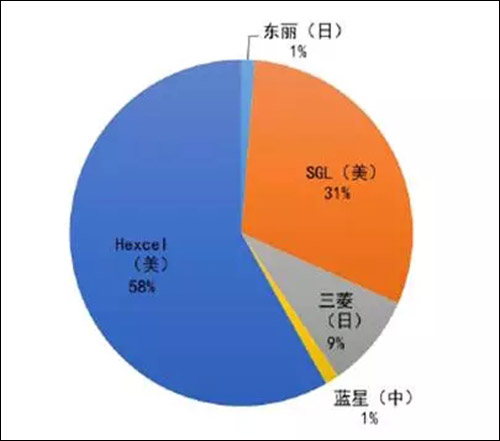 Global carbon fiber market share map
(2) international carbon fibre market and trend analysis
A. global carbon fibre market demand and trend analysis
Carbon fiber rarely direct application, mostly through deep processing into intermediate or composite materials, carbon fiber composite material as a structure or function has been widely used in aerospace, industrial and sports leisure products three areas. Carbon fiber with light weight, high strength, high modulus, high and low moderate corrosion resistance characteristics of the earliest application in aerospace and defense, such as large aircraft, military aircraft, unmanned aircraft and missile, rocket, satellite and radar cover, etc., and aerospace fields using carbon fiber performance level is the highest relatively. In the field of industry, carbon fiber is widely used in automotive, cable, wind power, pressure vessel, Marine industry, electronics, industrial equipment and civil construction, etc.; In the field of sports leisure products, golf clubs and fishing rods for the earliest applications, in recent years, cycling, tennis rackets, badminton racket sports products also more and more use of carbon fiber material, generally use grade T300 carbon fiber can meet the demand, but in order to improve product performance, some parts have also started to use T700 carbon fiber level even higher performance.
With the continuous development of carbon fiber, carbon fiber in the field of industrial and aerospace application scope expands unceasingly, in the field of proportion is on the rise, also predicts 2020, demand of carbon fiber, the amount will reach 157300 tons, the average annual compound growth rate of 13.62%; Overall demand in the world is expected to reach 21.92 million tons by 2024, although the growth rate has slowed, but the compound growth rate is still 11.38 percent. The fastest growing industry, with a combined growth rate of 14.52 per cent over the next decade, has seen a combined growth of 17.55 per cent over the past five years. The proportion of carbon fibre consumption in the industrial sector will rise from 63.55 per cent in 2015 to 81.63 per cent. Demand in the field of aerospace into rapid growth in the next five years, while the sports leisure areas in the world within the scope of application is relatively mature, demand has been increasing steadily each year. 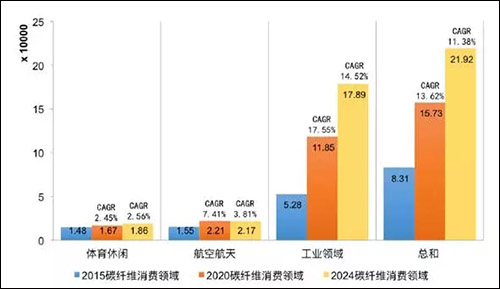 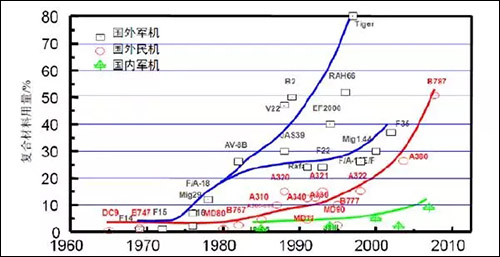 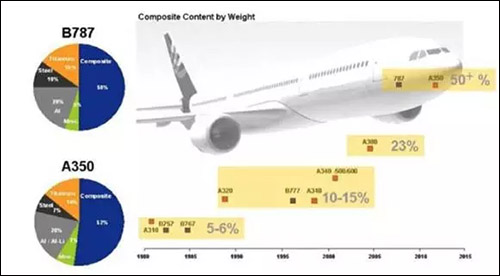 Composite materials in the commercial aircraft application scale trend chart
In addition, in recent years the UAV (UAV) including the fighter jets (UCAV) is developing rapidly, due to low cost, light structure, high mobility, high overload, high stealth, the technical characteristics of long distance, determines its urgent need to lose weight, the use of composite materials proportion basic is the highest of all aircraft, the Global Hawk (Global Hawk high-altitude long-endurance UAV common composite material was 65%, and the dosage of advanced unmanned aerial vehicle (UAV) composites is improved, 45 c, X X - - 47 b, "neurons" and "thor" are using 90% of the composite materials. In recent years, unmanned aerial vehicle (uav) in addition to the widely used for military purposes, patrolled the disaster and environmental monitoring, geodetic aerial photography and weather observation USES more and more widely in the field of civil, as the plane form batch production, will continue to increase in the amount of composite materials on the unmanned aerial vehicle (uav).
In the field of aerospace, carbon fiber composite material not only accord with the requirement of structure materials of space technology to reduce the quality, also accord with the structural material with high specific modulus and specific strength, which has the function of performance and can design, by a large number of applications. In addition, the weight of the shuttle every 1 kg less, can relieve the carrier rocket 500 kg, therefore, widely used in the aerospace industry advanced carbon fiber composite materials. The United States and Europe have less than 10 percent of the total weight of their satellites, because of the widespread use of high-performance composite materials. At present, the satellite's microwave communication system, energy system and various supporting structures have basically been made of composite materials. In terms of the carrier rocket and strategic missile, carbon fiber composite material with its superior performance got better application and development, has been successfully used in "pegasus", "delta" carrier rocket and the trident Ⅱ (D5), such as "dwarf" missile model; The us strategic missile MX intercontinental missile, the Russian strategic missile "poplar" M missile, is used in the advanced composite launcher.
High power and long blade demand accelerate the carbon fiber of wind turbine
Wind power is one of the representatives of clean energy, which is favored by countries around the world. Since its commercialization in the 1980s, it has experienced the rapid growth of globalization. By the end of 2015, the global total installed capacity of 432.42 GW, the cumulative annual growth rate of 17%, according to the forecast of GWEC, global wind power cumulative installed capacity will be increased from 369.6 GW in 2014 to 666.1 GW in 2019, the compound growth rate as high as 12.5%. Wind power in the future development direction, in addition to emerging areas, such as Latin America, Africa and other places to exploit market, low speed blower fan and sea will gradually become the hot spot.
For economic reasons, the current mainstream of blades for glass fiber reinforced plastic (GFRP) material, but with low speed and the continuous development of sea fan, fan blade length increasing, part of the structure using carbon fiber and carbon fiber/glass fiber hybrid materials in the comprehensive cost will be an advantage. According to estimates, more than 40 meters key structures such as beam in wind-power blades cap, girder using carbon fiber composite materials on the one hand can make the blade weight decreased by 38%, 14% lower cost; On the other hand, it can improve the fatigue performance of the blade, improve the output power, and make it easier to produce large diameter and adaptive wind blades with carbon fiber.
C. Innovation in the car industry brings demand in the carbon fiber industry
As stricter emission standard and the low carbon life is accepted by the people, has become an important research topic in the automotive industry for energy conservation and emissions reduction, in the case of energy innovation co., LTD., one of lightweight is the key to solve the problem. Carbon fiber has the outstanding advantages of high modulus and ratio, high potential and good safety, which is the best choice for car. According to the European aluminium association, fuel efficiency can be increased by 6% to 8% if car quality is reduced by 10%. In absolute terms, the weight of the car is reduced by 100kg per 100 kg, and 0.6 liter per 100 Km of fuel, and the co2 emissions can be reduced by about 10g/Km. Since 1953, the world's first car full composite material body - GM Corvette manufacturing success, along with the advance of composite technology, now carbon fiber composite materials in the automobile body, tail, automotive chassis, engine cover, car interiors, and other places. BMW i3 is a large quantity of carbon fiber composite materials, weight loss of about 250-350 kg, and has set a successful example for quantifying automobile.
With the continuous development of automobile industry, especially in the new energy vehicles is popular today, the market of automobile lightweight, energy saving and environmental protection needs to put forward the higher request, under the automotive lightweight demand, since 2009 the global auto industry is on the rise, the demand of carbon fiber of carbon fiber composite materials application proportion rising in the field of auto industry. The forward-looking industry institute conservative estimates, the future demand of carbon fiber in the field of auto industry will keep the size of the 7% growth, according to the growth forecasts, by 2018 global demand of carbon fiber in the field of auto industry will be around 8600 tons.

Status and forecast of global carbon fibre production
Current global leader of the carbon fiber is Japan and they set up factories in Europe and the United States, the second is to rely on the healthy development of the European and American aerospace market HEXCEL and CYTEC companies in the United States, and Germany SGL companies rely on strong industrial innovation system, with the increase of test in the field of carbon fiber in China, China's carbon fiber production share of the world also continue to improve. 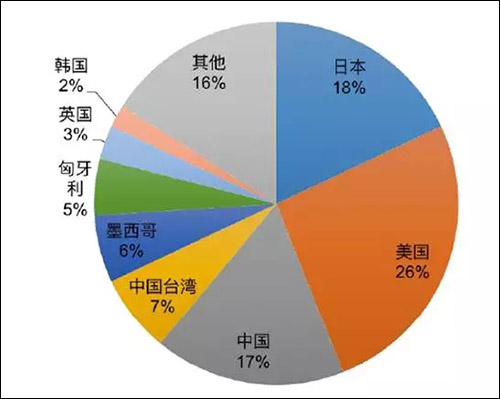 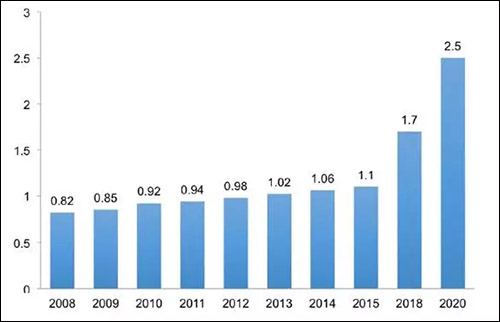 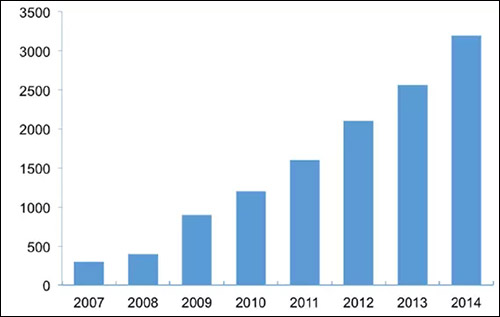